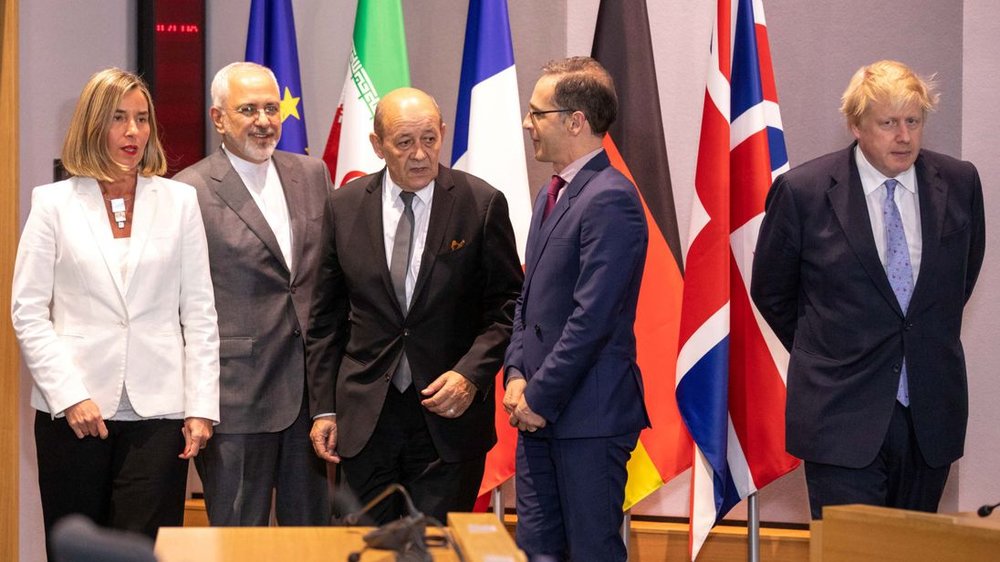 The message of your humiliation has been received:

statement by EU three members of the JCPOA

The European belief in a hierarchical world order is an “unnecessary evil” of our time. Although Europe considers the superiority of the US over itself and the superiority of Europe over Iran as a prerequisite for all talks and ties, this short-sighted view by a collection of small countries that consider themselves inferior is not becoming against a country like Iran who can have a say in the age of conflicting ideas due to its demography, surface area, natural resources, and most importantly its elements of hard power, soft power norms, and its noble values and ideals.

How can just this one line in the statement issued by the EU three who are participants in the Joint Comprehensive Plan of Action (JACPO) nuclear deal with Iran, stating, “The EU has complied by all its commitments, including the lifting of sanctions against Iran as predicted in the JCPOA” not be painful for any Iranians? Is there even one person in a population of eighty million in Iran suffering and worrying about a lack of medication, daily provisions, and staggering increases in the cost of living due to the “maximum pressure” policy who can confirm the fulfilment of European obligations? Of course, it is surprising that after Trump’s departure from power, Europe finally acknowledges according to this one sentence that it lifted sanctions under its obligations in the JCPOA.

According to this statement, European countries have returned to the pursuit of US policies. Following 46th president-elect Biden’s victory, they intend to abandon the EU independence strategy, wait for the new US policy towards Iran and, of course, lay the ground for it. However, US decisions on Iran will not be really new, and the resumption of the same routine of coercion and pressure and abuse will continue where it had been left off by a disruptive force called Trump which had ended European opportunistic, exploiting scenarios against Iran. The only difference being that, during Trump’s one term in office, events took place and trends emerged that Iran, the world, and even Europe, cannot and should not turn a blind eye to.

In the Trump era, the world realized that an existing current in the US can wage a war against international order, multilateralism, and justice without any real obstacles or constraints. This threat to international security and norms has challenged justice and the pluralistic world over the past few years, highlighting the need for laws and procedures against US abuses of the international system. This dilemma will not be resolved as Trump exits the scene to go behind the scenes. The same scope of powers still remains at Joe Biden’s disposal today.

The US paralyzed Europe not only in the implementation of the JCPOA, but also in the resolution of many other issues. It seems that Europe must now have an understanding of the US will to strike at the truth with extraterritorial laws. The US approach kept Europe from managing its disintegrated transatlantic alliance, European defense policy, decision-making on the faith of the EU, defining international trade, the role of international agencies and agreements, and much more. Is Europe still hoping to work with the US after these difficult lessons to part ways with it?

Iran has witnessed enough European self-humiliation; the world has seen this for long enough. Today, Iran is looking at a much broader landscape than the European horizon and is better equipped to play by the emerging rules of the international system due to a systematic set of coherent values and norms. Therefore, it does not consider negotiations with the US and a return to unfulfilled European promises and advice, which were nothing but a waste of time and energy, to be in its interest. Iran has seen enough of what can happen in the absence of “real” and “tangible” commitments by the European participants of the JCPOA and the full realization of the “economic spirit of the JCPOA”.

As such, although Iran's diplomatic apparatus is not turned towards Europe, it will continue its approach to look to the East according to the spirit of "neither East nor West" rule, in which it can work with responsible players who, unlike Europe, do not need Iran's security and normative assistance in its geopolitical position, nor do they deny Iran's important and inevitable role in the international system, in an effort to maintain the independence, freedom, and welfare of Iranians with the help of alternative ways for the security, moral, and normative role of the IR of Iran in the international system.