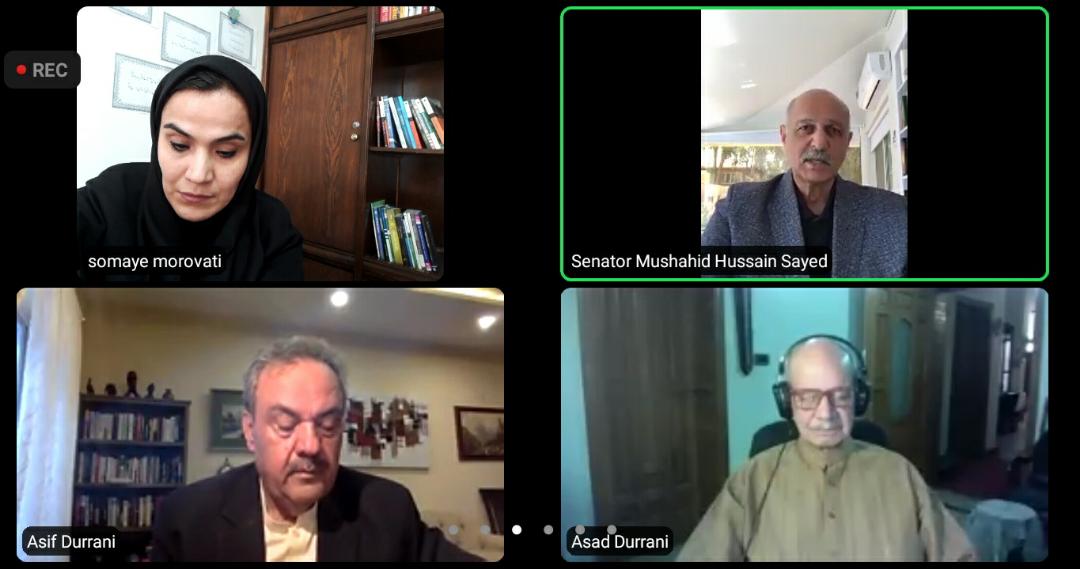 Recognizing the limitations and capacities can boost Iran-Paki relations


The experts from both sides noted that Pakistan-Iran diplomatic relations are based on the commonalities of language, literature, culture and religion that can enhance bilateral strategic and trade collaboration for a win-win situation. Post withdrawal of the US troops from Afghanistan, the two countries should have a mutually agreed strategy to handle the emerging situation of security and peace in the region. They said the enhanced cultural collaboration and heritage tourism can bring the people from both sides closer to each other beyond the ethic and religious divide. Youth engagement in a variety of sectors is imperative. The CPEC could be another economic and trade bond for closer ties between Iran and Pakistan. A youth expedition from Chabahar to Gwadar would lead to much better understanding between the people of both sides, and will open many vistas of collaboration.

Senator Mushahid Hussain Sayed said three factors will promote ties between Iran-Pakistan in the near future. First, CPEC and regional connectivity are key to the economic future of both Pakistan and Iran, with the Iran-China deal a plus for Pakistan, securing Pakistan’s Western flanks, and good for the development of Gwadar Port. Second, with instability likely in Afghanistan post-US withdrawal, counter-terrorism border cooperation, and border management will bring the two countries closer as both seek lasting peace, stability, and security in Afghanistan as well as on their border. Third, with pressures from the Biden Administration on both Iran and Saudi Arabia, Pakistan can play the role of a bridge between Tehran and Riyadh, especially on issues like Palestine and Kashmir.

He said Pakistan also supports the revival of Iran's nuclear deal and the removal of all sanctions on Iran as Pakistan too once faced discriminatory sanctions from the West. One new plus point is a closer rapport between the military and security establishments of both countries, with greater trust among them.

Lt General (retd) Muhammad Asad Durrani said Pak-Iran relations have generally been good – ranging from close to correct – at their peak before the Revolution. During the Ayatollah Khomeini era, the US, then our close ally in Afghanistan vacated, wanted our relations downgraded because of the siege of its Embassy in Tehran, but we refused and have ever since represented Iranian interests in Washington.

He said after the American invasion of Afghanistan, the two countries started addressing irritants like Jandullah, and Russia, China, and Turkey joined hands to manage the chaos post the US withdrawal. Balancing our relationship with Saudi Arabia and Iran has been a challenge – mostly met with finesse. Post-2003 instability in the Region, especially after Mohammed Bin Salman foolishly invaded Yemen, became more complex but was still taken care of. Some bigots have at times aired sectarianism, but the deep commonality of interests prevailed.

Ambassador (Retd) Mashaallah Shakeri said Pakistan and Iran enjoy centuries-long relations in cultural, social, politics, and economic and trade spheres. However, the historical developments, however, resulted in the alteration of geopolitics in Persia and the subcontinent as well. But the drastic consequences regardless of their implications on geography or geopolitics of the region could never change the principle ties between the relevant territories and Societies. Persian Culture, language and literature once were the elements by virtue of which the religion of Islam was introduced to some part of South Asia particularly to the region that is now known as Pakistan.

Ambassador (retd) Asif Durrani said the strength of Pakistan-Iran relations is that they have no dispute, although they may differ in perceptions on specific issues. Both have always cooperated bilaterally and at the international forums. In 2008, Pakistan supported Iran in the International Atomic Energy Agency (IAEA) while India cast a negative vote against Iran. Pakistan fully supports Iran’s right to access to nuclear technology for peaceful purposes.

Ambassador Durrani said both countries face terrorism and separatism, at times foreign-inspired. Both live in insecure neighborhoods and face varying degrees of external pressures. While from the beginning of its revolution, Iran had to face the wrath of the Americans, and Pakistan has been facing Indian hostility and external pressures due to the Afghanistan situation. On the other hand, Iran-Saudi rivalry has come as a big challenge for Pakistan’s diplomacy. Iran has appreciated Pakistan's neutral stance on Yemen, but it caused irritants in Pakistan-Saudi relations. A Saudi-Iran rapprochement is urgently needed to lower tensions in the Middle East.

Dr. Somaye Morovati Iran and Pakistan have a long history of cooperation with regional organizations which would provide a good experience of economic, commercial, and political relations between the two countries. The US has been a most influential foreign actor in Iran-Pakistan relations. The issue of the India-US strategic partnership and the crisis in Afghanistan requires Pakistan to maintain a superficial relationship with the US despite tensions. Iran’s foreign policy in the face of sanctions is to strengthen relations with its neighbors despite the US designs against it.

Iran and Pakistan need to redefine their relations and look at the region and themselves through a different lens. One of the most important components that can help this issue is strengthening the connections between people, elites and creating deep and multilayered connections. Re-examining eachother's capacities to access and strengthen regional connections is a good example of this.

She said Iran's capacity to connect Pakistan across western borders and access Europe and the Middle East can boost its trade links. The Zahedan- Quetta railway is now connected with the national rail grid of Iran which is linked to Turkey and beyond.

Reham Khan suggested perception management to both foreign offices and to engage youth for cultural collaboration and joint ventures in many fields including cinematography. The good things shall be shared from both sides to negate the differences and propaganda. The CPEC would bring more opportunities for interaction and joint business ventures where culture and tourism could be the focus.