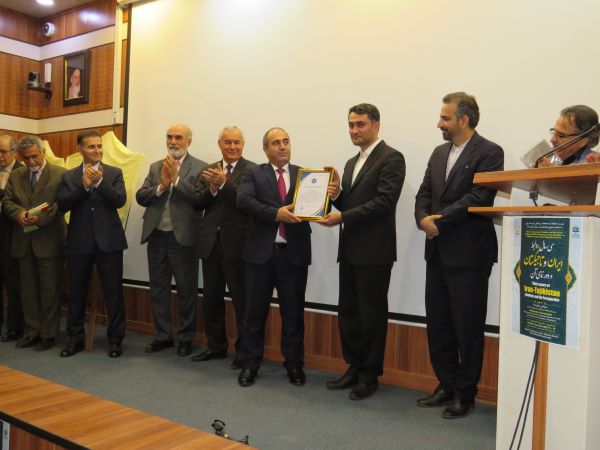 
The conference on “Thirty Years of Relations Between Iran and Tajikistan and its Landscape” was held on 1 November 2022 in Tehran, with the participation of political, cultural, and research elites. The conference was organized with the efforts of Tehran International Studies and Research Institute (TISRI), the Embassy of the Republic of Tajikistan, and Abbasabad Cultural Center. The conference began with the Managing Director of TISRI, Dr Abed Akbari welcoming the guests as the conference president. He proceeded by pointing out that relations between the IR of Iran and Tajikistan are inspiring beyond the customary political and diplomatic ties as the have an antiquity of thousands of years and have only become a part of the official political process in the last thirty years, following the independence of Tajikistan. He added that the two countries enjoy myriad commonalities so that it is virtually impossible to separate the two nations. Dr Akbari believes that Iran-Tajikistan relations have entered a developmental stage under the 13th government in Iran, during which the first trip was taken to Tajikistan by Dr Raeisi as head of state, increasing the trade volume between the two by nearly threefold in the space of one year. Dr Akbari continued by praising this trend, but stated that it was still insufficient given the available potentials. He emphasized that a full-scale multidimensional campaign was required to bring relations between the two countries to its optimal level. Dr Akbari wrapped up by congratulating the Tajik nation on the occasion of the silver anniversary of the historic XVI session of the Supreme Council of the Republic of Tajikistan.

The second speaker at the conference was His Excellency Nizomiddin Zohidi, Ambassador of Tajikistan to Tehran. He honored thirty years of diplomatic relations between Iran and Tajikistan and stated that his country, under the leadership of President Eomomali Rahmon, had succeeded in putting behind its material and spiritual hurdles and citizen war which occurred in the years following independence. He added: The Republic of Tajikistan has always emphasized on expanding fruitful cooperation and friendly relations with Iran since its independence as one of its foreign policy priorities. Iran also welcomed the interest by Tajikistan to revive common values and was one of the first countries to recognize the independence of Tajikistan. His Excellency Mr Zohidi also added: Following the independence of Tajikistan, the IR of Iran inaugurated its embassy in Dushanbe within a short time and Tajikistan reciprocated following the citizen war by opening its Embassy in the city of Tehran in July 1995. The opening of both embassies paved the ground for growing interactions between Iran and Tajikistan. Zohidi reiterated that: The most significant indicator during the first period of relations between the two countries was cooperation to establish peace and stability in which the role of Iran must be mentioned. From 1997-2015, political, trade, and economic ties between the two countries also expanded and the high level of political and diplomatic relations between them was unprecedented. The Ambassador of Tajikistan to Tehran continued by saying: The Joint Cooperation Commission of Iran and Tajikistan has to date held fourteen conferences in Tehran and Dushanbe, playing an important part in growing trade ties between the two countries.  He reminded: The Republic of Tajikistan has invariably expressed its support for Iran’s peaceful nuclear program on the international stage. Also, our President Eomomali Rahmon spoke firmly at the European Parliament of the level of ties between Iran and Tajikistan and supported Iran’s nuclear program. He criticized Western double standards in this respect. The Tajik diplomat pointed to a short hiatus in relations between the two countries, and said: The political will of Iran and Tajikistan laid the ground to transit from this period, following which ties between the two countries expanded, accelerating after the 13th government took office. On his first trip to Tajikistan, President Raeisi of Iran held important meetings and discussions and the two sides stressed on a future trade volume of up to 500 million euros given their reciprocal potentials. Zohidi wrapped up by mentioning the Tajikistan Cultural Week in Tehran, saying: We are also happy that the Iran Cultural Week is currently taking place in Dushanbe.

Another speaker at the conference was Mr Alireza Delkhosh, the head of the Ministry of Foreign Affairs Center for Public Diplomacy and the Media. He praised the conference and stated that during his trip to Tajikistan by the Iranian president, seven MOUs, one agreement, and a joint statement were signed. An estimated nine months later, the President of Tajikistan also traveled to Tehran, leading to the signature of 17 MOUs between the two countries. This brings the number of signed MOUs to 25 in less than a year, indicating the potentials of the two countries to expand cooperation. He added: The approach of the 13th government is to implement the MOUs. In fact, we insist that every signed document must be implemented. The foreign ministry official added: One of the reasons cultural cooperation is mentioned in all the relations between the two countries is that if the right cultural infrastructure does not exist, political and economic ties will also not last. Tajikistan tops the list when we speak in a common language with our counterparts without the need for translation. Delkhosh also pointed out that strengthening cooperation at the regional level was a priority of the country. Speaking about lifting visa requirements between Iran and Tajikistan, he stated: Once interaction at different levels increases between the two countries, lifting visa requirements can be placed on the agenda for political, service, and ordinary applications. This can take place with an adequate volume of economic or other types of interaction.

The next speaker was the special conference guest, Mr Khairuddin Usmanzadeh, the President of the Strategic Research Center under the President of Tajikistan. He began by thanking the conference organizers, and the political, cultural, and scientific elites, adding that the leaders of both countries have tried to expand bilateral cooperation over the past thirty years and that the IR of Iran was one of the first countries to recognize the independence of Tajikistan. This provided the opportunity for both countries to expand relations over the years. At the outset of its independence, Tajikistan was faced with numerous obstacles which led to a citizen war at the time. This was difficult for the dignity of the people and the country, but President Eomomali Rahmon was able to ratify the constitution in a short period of time with good amendments. The President of the Strategic Research Center under the President of Tajikistan also stated: Iran-Tajikistan relations have a cultural backup and the two countries have expanded their cultural cooperation. Tajikistan believes that an ongoing expansion of ties between the two countries will lead to development in Central Asia. Hence, both sides are trying to take measures in line with regional peace and stability. Usmanzadeh added: Currently, security in Central Asia is under threat. Today, we must ask the question of why security cannot be provided. What weight do regional countries carry in security and political calculations? He continued: The answers must be sought in moving towards a single model of regional cooperation. Tajikistan also endeavors to play a constructive role in problem-solving.

At the end of the conference, researcher of Iran-Tajikistan cultural heritage, Nader Karimian-Sardashti, and Professor of Music Sadegh Cheraghipour, shared their experiences in the arts and culture of the two countries. At the same time as criticizing the low levels of cultural ties given the considerable potentials, they expressed hope that this will grow increasingly and strengthen ties between two nations who share a common language.

Two books entitled Iran and Tajikistan: An Opportunity for Strategic Partnership by Dr Abed Akbari, and Tajikistan, the Jewel of Central Asia by Marufjan Abdul Rahmonov, published by TISIR were inaugurated. On the sidelines of the conference, books on Tajikistan and a photography exhibition of the historical and natural landscapes of Tajikistan were also showcased. 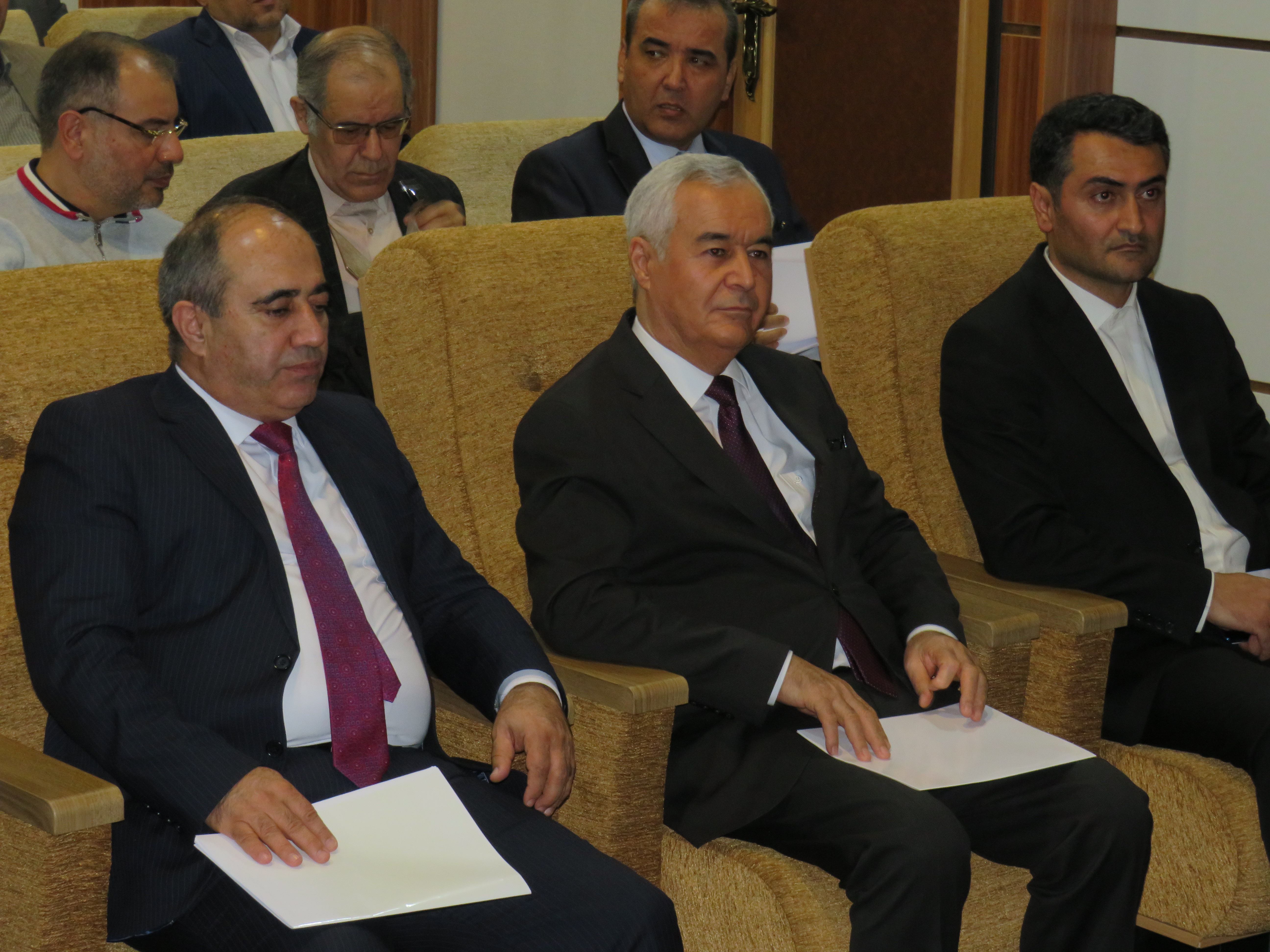 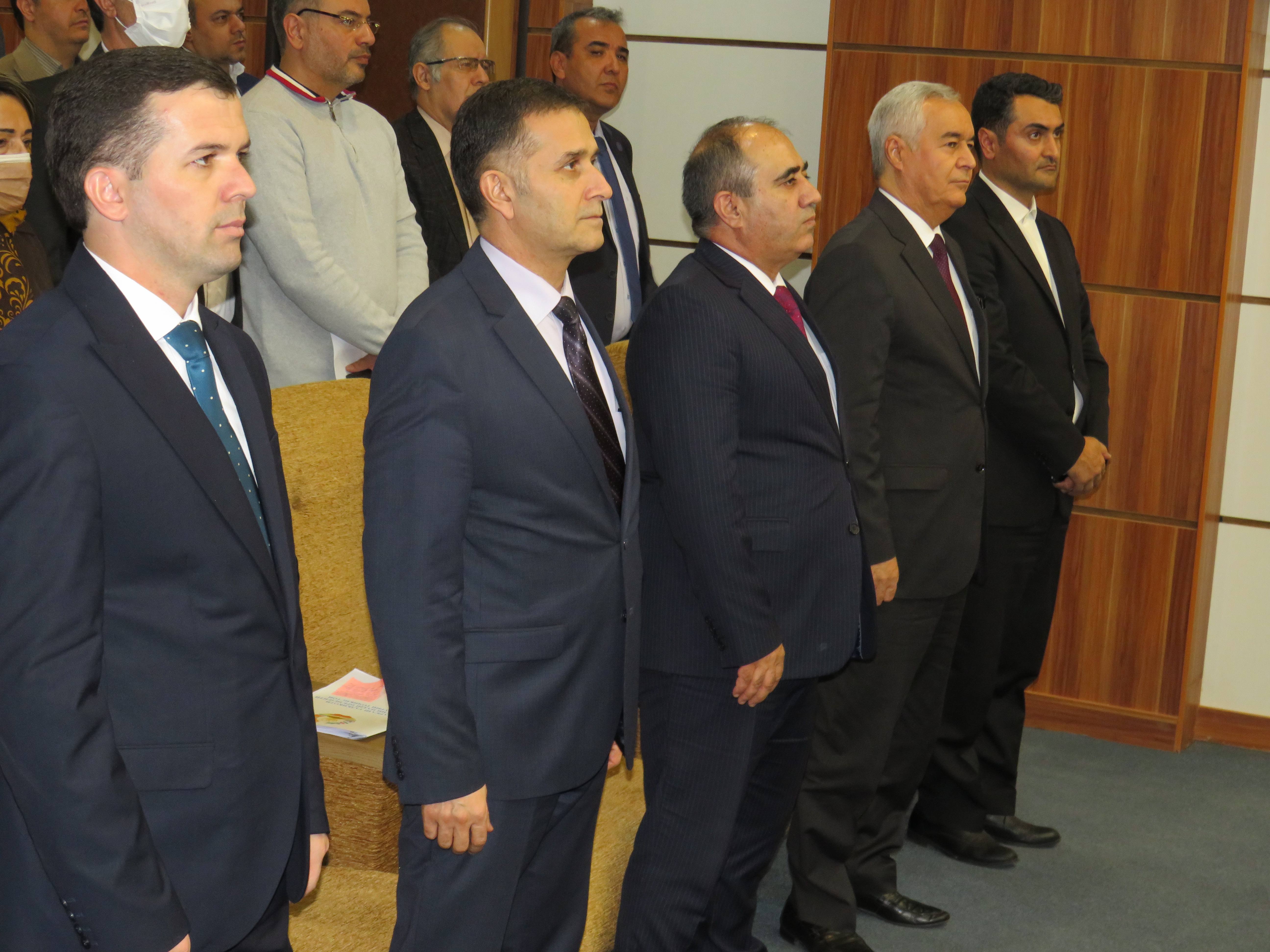 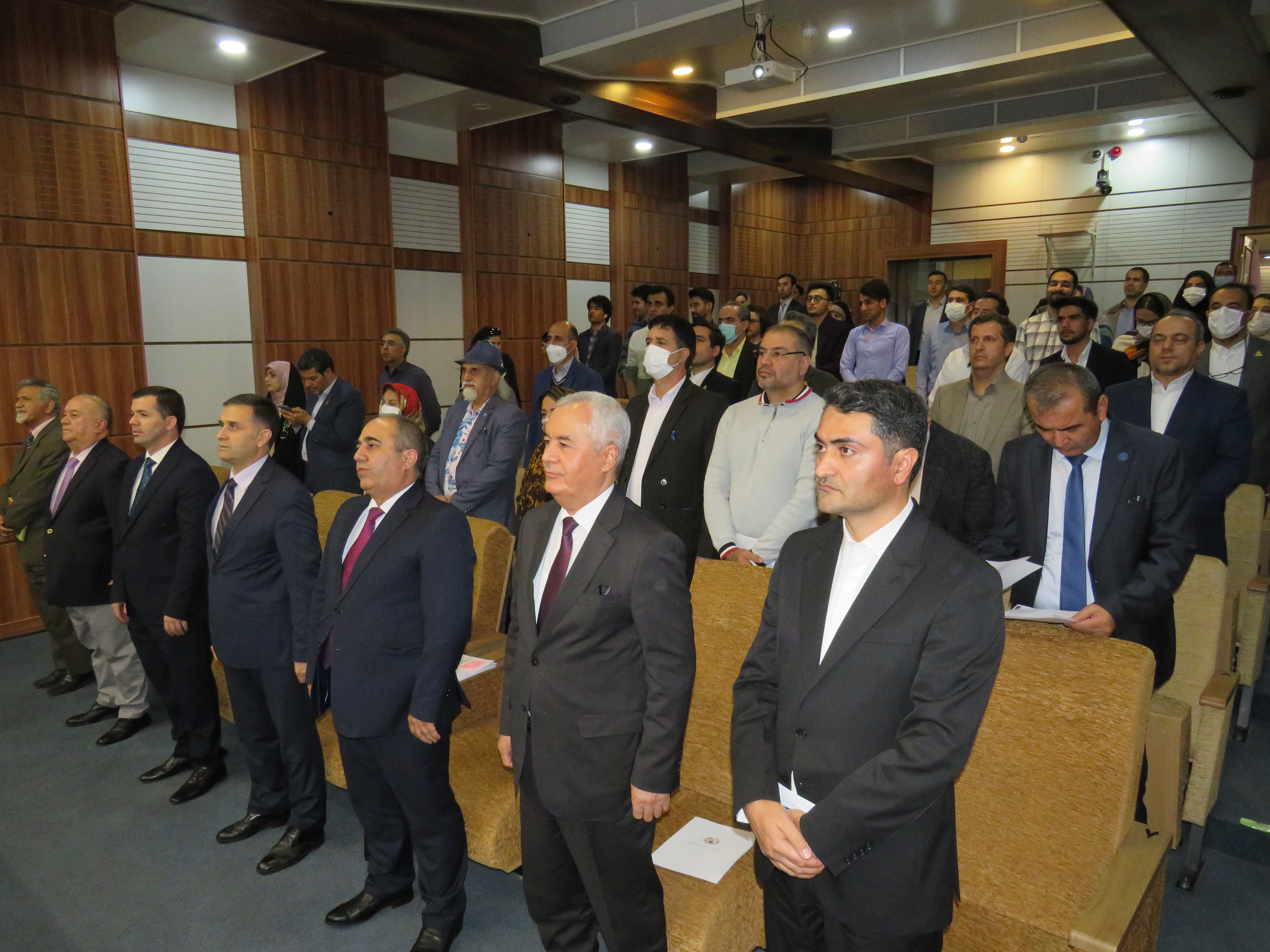 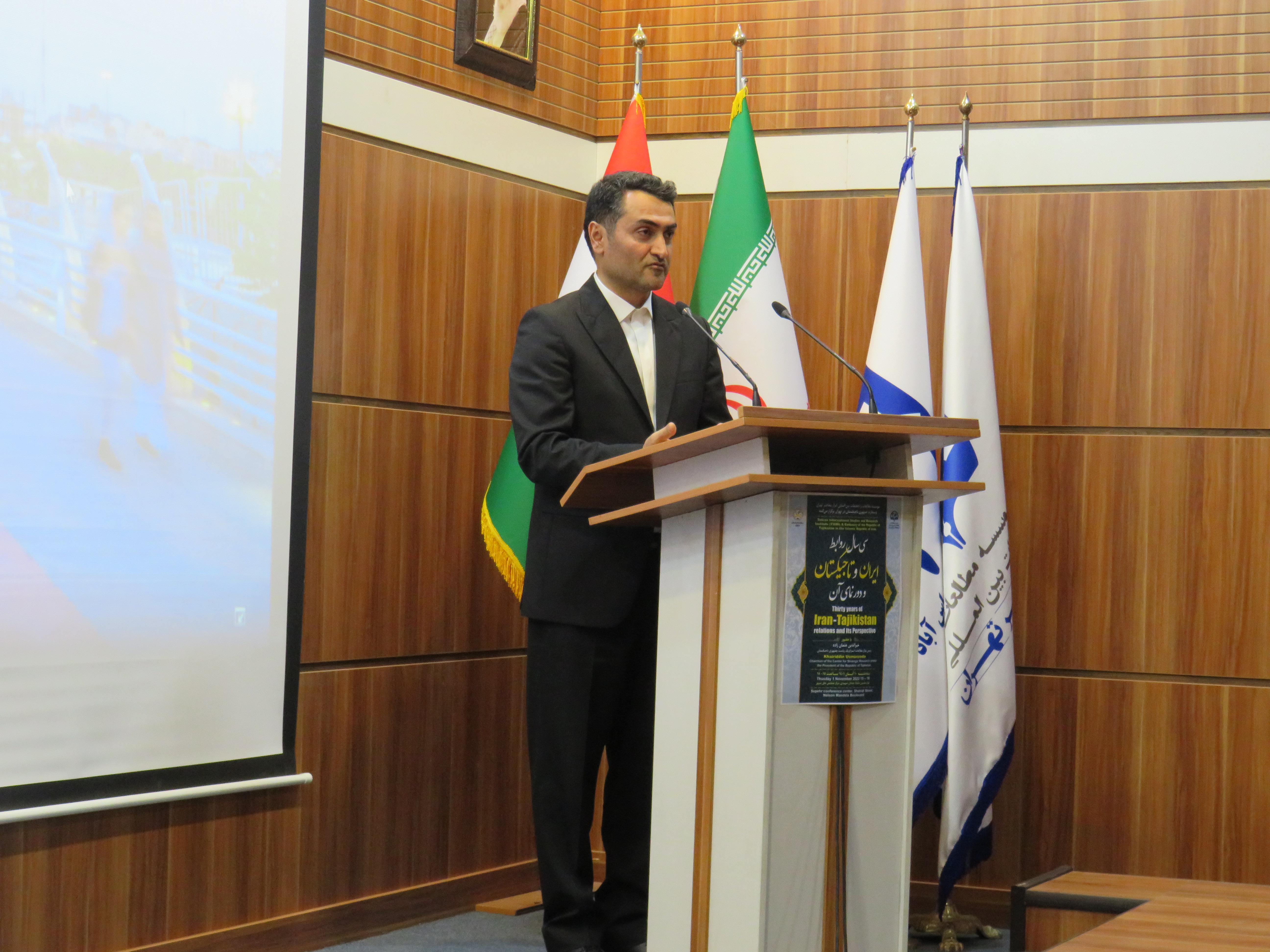 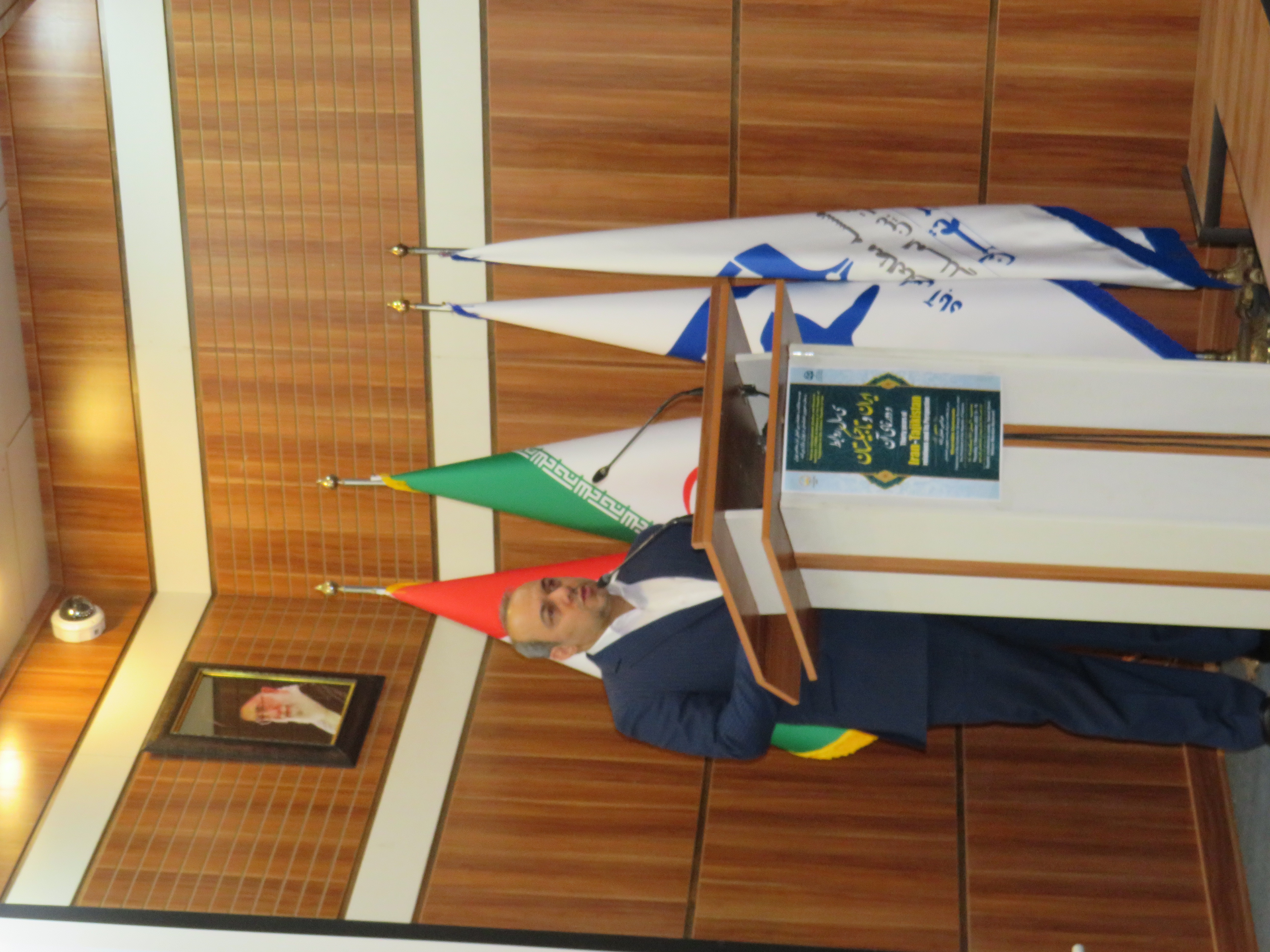 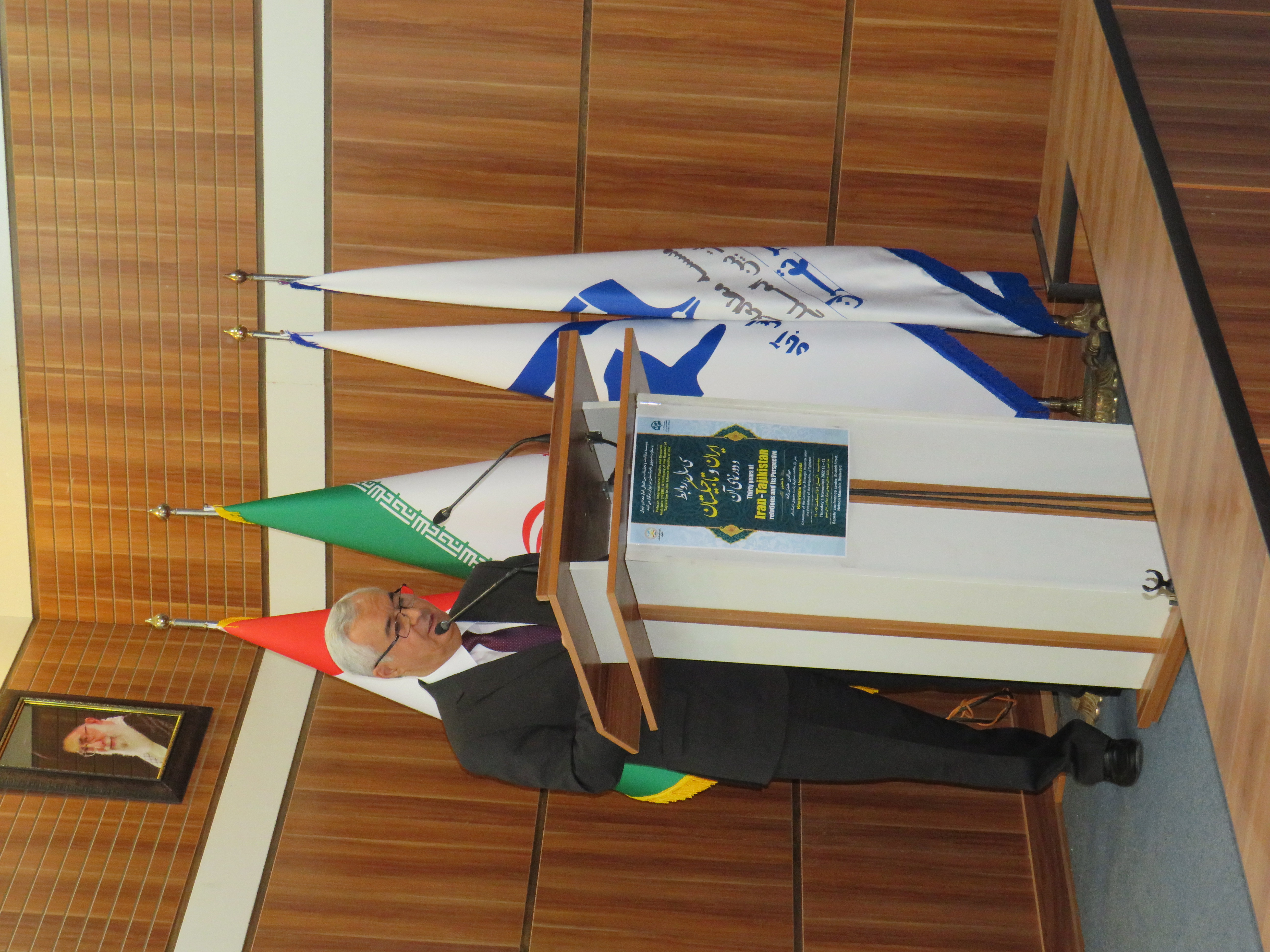 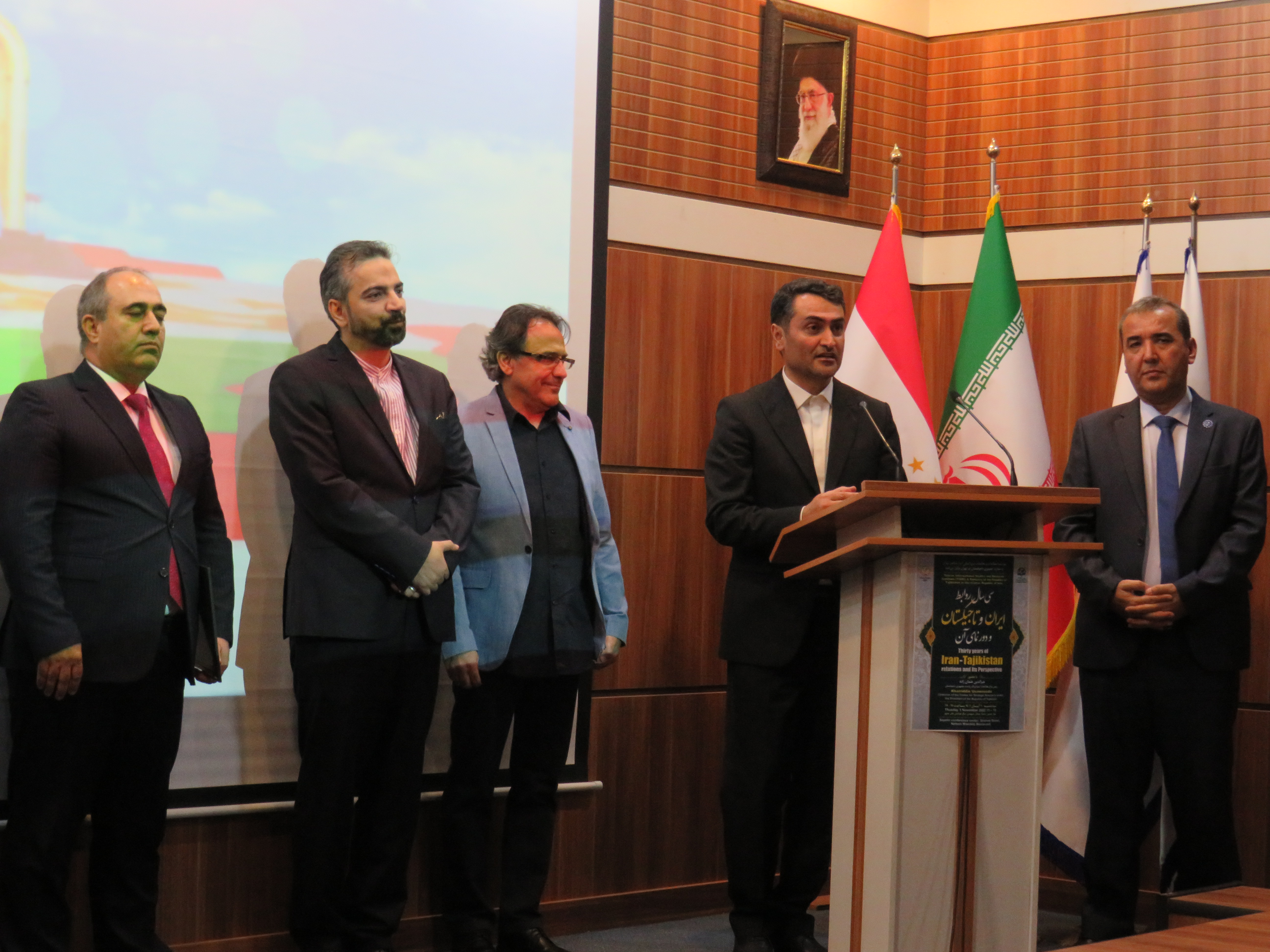 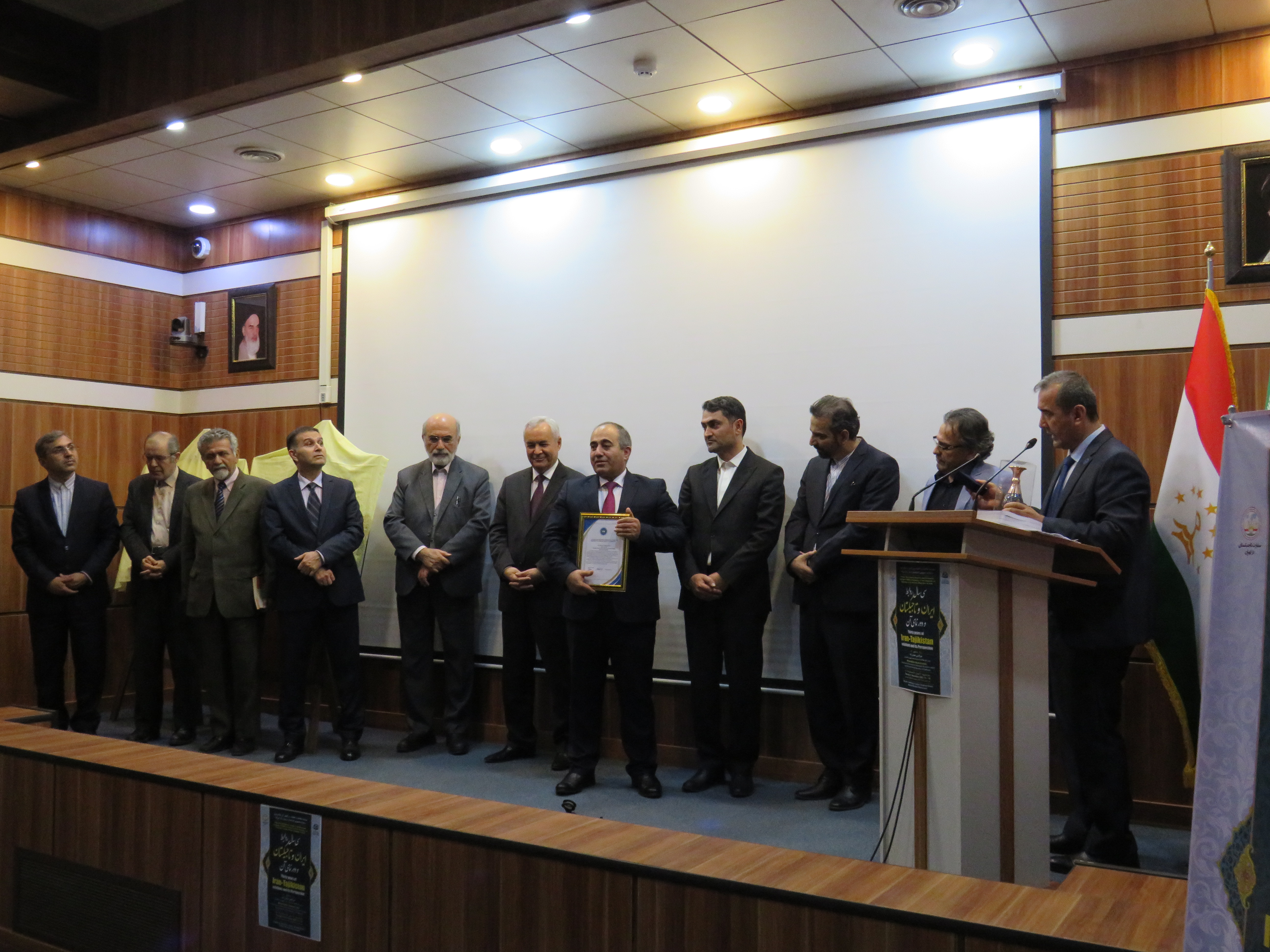 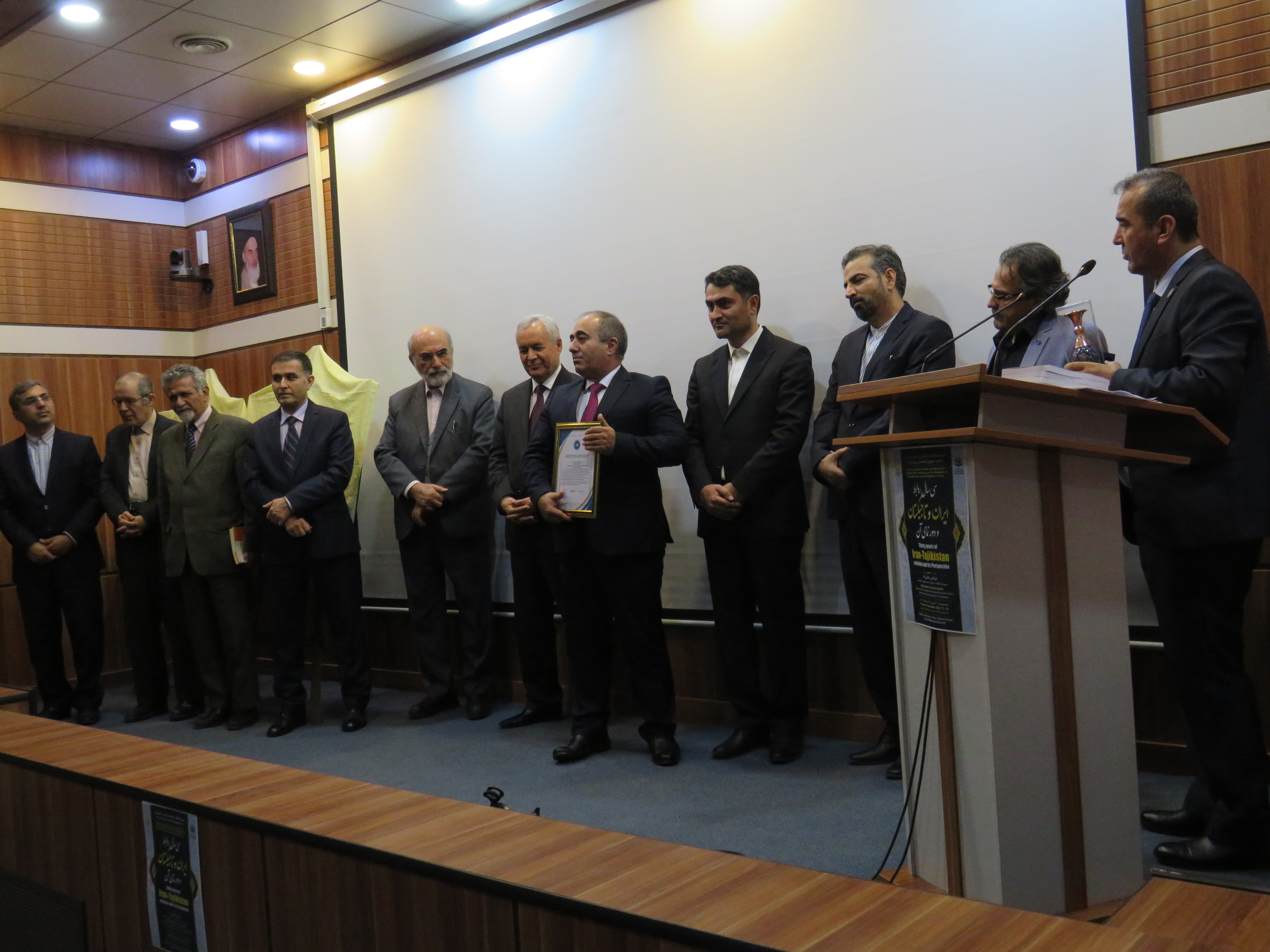 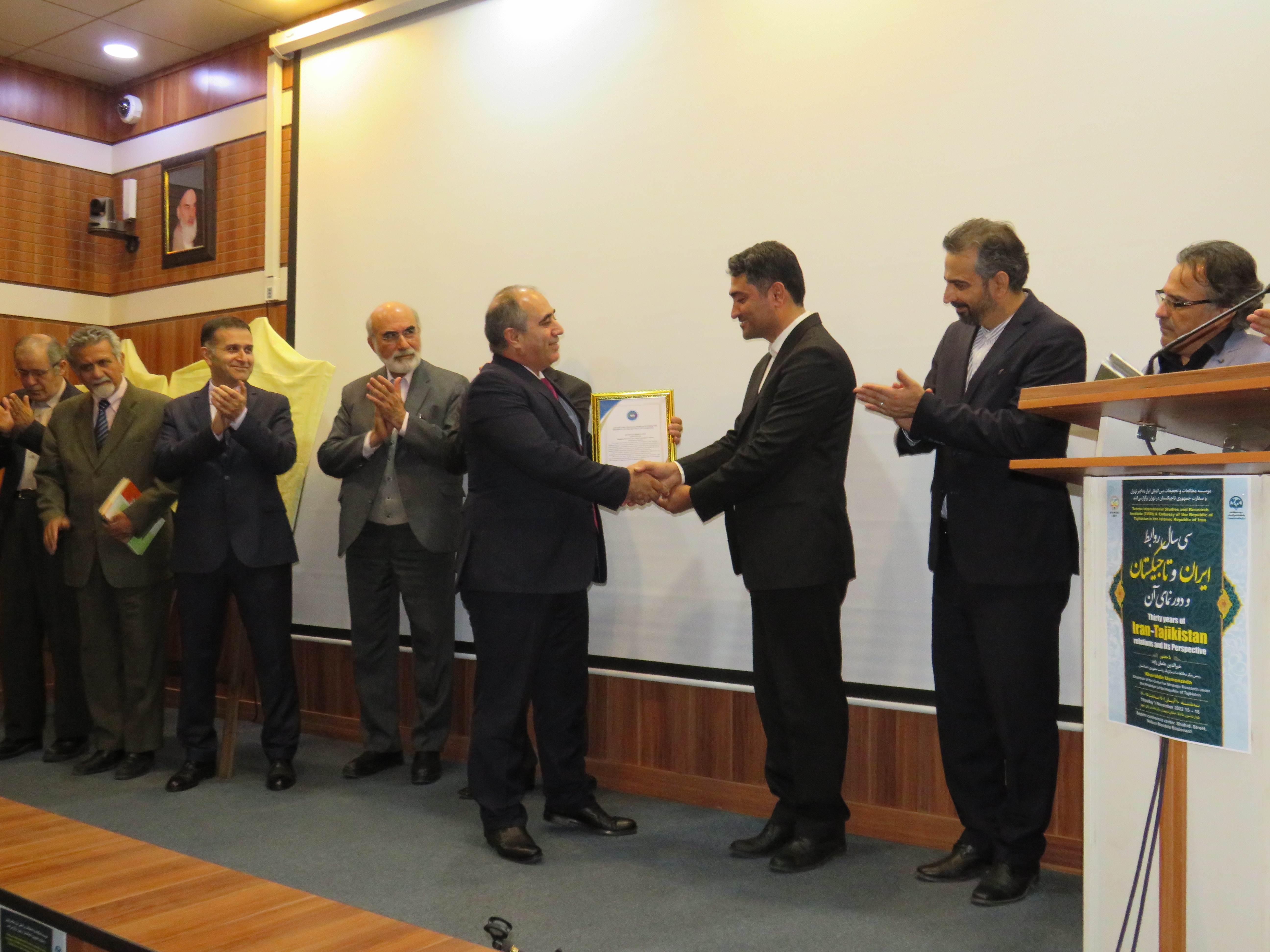