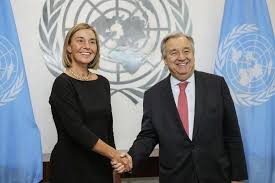 Multilateralism is currently shedding its skin and going through a metamorphosis. Certain countries organize collective, institutional efforts to maintain multilateralism, believing that this is the best way to safeguard their interests, especially in health, security, progress, and environmental protection. In the first instance, the common ground between these countries is how they view the importance of multilateralism, common concerns, and solving global issues. They define its significance on their national agenda by keeping in mind international opposition, in particular from the United States and the Zionist regime. They have envisaged three priorities for their “initial” cooperation internationally, namely trade, monitoring conventional weapons, and climate change.

This note will evaluate the roots of institutionalized criticism to multilateralism by countries and explicate the importance of change while maintaining a multilateral system from a European perspective by taking into consideration the three important issues of trade, monitoring conventional weapons, and climate change.

Reasons for the Decline of Multilateralism

With the decline of the liberal international order, international law-abiding organizations which are in charge of organizing government interaction on a global or regional scale have lost their former place. Given that key actors such as the US and China are increasingly open to questioning these international institutions and orders, the fear exists that the future of international relations will again be determined by the strongest rule and a return to “bullying” on an international level, displaying an obvious tyranny where no effective protests can be made. As a result, all international efforts to make the voice of minorities heard would be wasted. Therefore, before this becomes a determining reality on the international scene, governments must endeavor to remain committed and supportive of multilateralism.

Indicators for the decline of multilateralism are many: Although the role of the United Nations Security Council in maintaining global order and security cannot be denied, it has been unsuccessful in numerous cases. Even those international institutions which consist of like-minded countries, such as the G7, are no longer able to issue conclusive statements at the end of their meetings. International treaties such as the 2015 Paris Agreement on climate change and the 2015 Joint Comprehensive Plan of Action (JCPOA) nuclear deal have been rejected by some of the signatories. Other countries have challenged the operation of multilateral institutions such as the World Trade Organization with new unilateral trade policies, and the list continues.

From a European standpoint, two main reasons can be cited for the decline of multilateralism. Firstly, multipolar international systems established in the post-World War II era are very outdated and dysfunctional, requiring an overhaul. And secondly, the US is no longer the guarantor of order after World War II and its current government is actively seeking to abolish it. On the other hand, from the perspective of many non-European countries, international laws have been regulated without their participation and multilateralism based on these does not guarantee their interests. They are either struggling with the spirit of multilateralism, i.e. rules governing current multilateralism in the international system are unacceptable to them, or they have difficulty with its basics, struggling to maintain their interests within certain systems that impose their own version of multilateralism.

From a different aspect, the decline of multilateralism seems to bear a psychological burden in that, with the spread of globalization, countries see their national sovereignty being questioned within some multilateralism frameworks while living in a multilateral system. They are correct in two cases: First, when a third party such as the UN has agencies like the Security Council that discriminate against member countries; and second, the organizations, treaties, and international agreements which have not reached their objectives and fueled the emergence of parallel organizations, agreements, and treaties, creating doubt in the minds of countries about their membership in them; with the inability to recognize or compare the importance of bilateral or multilateral relations with other countries with which they even share an agency or treaty, they have carried out their duties in an incomplete, fraying manner. Poland is an example of this whereby it considers Russia a national threat and can barely establish a balance between multilateralism within the EU (which is interested in multilateral cooperation with Russia in certain cases) and multilateralism within NATO (with emphasis on bilateral ties with the US).

The Importance of Preserving Multilateralism

Despite the dark road ahead, a type of functional multilateralism can still be seen in certain organizations with limited members and short-term special projects. When countries are part of these international partnerships, they still see efficient multilateralism as one of the ways to safeguard their key interests. For instance, even if the EU acts as a cohesive whole, in many cases it cannot overcome the dilemma that challenges its interests alone, including the trade war between China and the United States. It needs to find international allies. Therefore, it provides itself with an opportunity for multilateralism in the case of sanctions on Iran and US extraterritorial laws.

As a moderator of this process, it should be kept in mind that the “plan” to safeguard multilateralism does not mean reviving a dead principle, but simply curing a disease which has lost its previous ability to self-heal and digest the dichotomy[1] in incorrect assumptions and dysfunctional systems on a global level or by a collection of nations. Although there is hope for multilateralism to remain in its essence, from the perspective of all its supporters this is only possible when a “rescue mission” is devised for it. In other words, abandoning the principles of a fraying multilateralism will create deep instability and other issues on a global level in the future. These include: global trade, due to increased protectionist measures and outdated trade laws; security, due to increasing military conflicts caused by a fierce arms race and the increased risk of accidental conflicts in the absence of transparency and channels for communication in times of crises; and the environment and ecosystem, due to global warming and lack of collective measures to reduce the carbon footprint in the economy. These are only a few instances in which interested countries can take part to safeguard multilateralism. In practice, it is necessary for each country to consider a plan for multilateral relations, taking into account its national interests within a multilateral format.

Requirements for the Preservation and Improvement of Multilateralism

Firstly, in the current complex security situation in which every country faces transnational challenges, it must be acknowledged that no country can overcome these single-handed and multilateral cooperation is a must. Be that as it may, since multilateralism itself is facing a severe crisis and countries tend towards unilateralism in the short-term to secure their national interests rather than take a long-term view of events, only an “efficient” multilateralism can act as an important tool in resolving today’s challenges.

Thirdly, a correct understanding of multilateralism must be developed. Multilateralism does not mean gathering similar votes around the negotiating table. Each seat represents a vote, a point of view, and a set of specific interests. For example, although multilateralism is a very valuable concept supported by the EU, it has also triggered many objections between member countries in recent years. The main reason is the feeling of weaker voices not being heard. Also, since multilateralism has repeatedly been used by the US, Chinese, and Russian policies, countries must be sensitive towards identifying between "multilateralism" and "following". In this respect, the EU example illustrates that in many cases multilateralism has been blindly followed in working with the US, Russia and China by some members, leading to divisions between them.

Presently, the EU is making efforts to define a new system and give itself the chance to create a new order which will help meet its strategic needs. As mentioned above, to adopt a multilateral approach, each country must define its own agenda by clarifying its national interests. By sharing their goals on a global level and widespread communication, they can cooperate with interested countries. As such, part of the agenda for France and Germany as EU leaders focuses on multilateralism based on the three universal themes of "world trade, conventional arms control, and the fight against the environmental crisis" and requires critical scrutiny by other countries in the international system in addition to demonstrating their mentality on introducing and preserving effective, functional multilateralism.

Countries facing transnational challenges today need multilateralism to resolve their issues. Multilateralism allows countries to be heard and participate in agencies whose budgets are funded by multiple nations who invest them in projects in multiple countries. Therefore, preserving multilateralism is of the utmost significance. It entails a range of aspects which can be implemented only if multilateralism is adopted by governments on a national level.

In the more advanced stage, countries seeking multilateralism are faced with complexities which require three actions: Resolving conflicts of interest between them on multilateralism and detailing the work, dialogue with disruptive countries, and finding allies who support multilateralism outside of their circle and that of the disruptors. In order to “safeguard” multilateralism and make it tangible and functional, these countries must find a number of like-minded allies in the first instance (like Germany and France) for every international case, on a case-by-case basis, for a range of topics and proceed by setting an agenda, objective, and lucid methods to resolve them.

It is also possible to find the causes of the deviation from this order whereby the “European” perception of multilateralism has been demoted to their influence on the case. Hence, it is necessary for other actors to closely examine and influence the “current format” which claims to “preserve” multilateralism, because the main objective of multilateralism is to hear the “voices” of all parties involved. Therefore, it is paramount for countries who intend to keep multilateralism to set an agenda for action and cooperation to this end. Considering the EU's three basic priorities (trade, conventional weapons monitoring, and climate change), Iran should be able to play an important role in achieving these priorities as one of the influential countries in West Asia and bring another voice into the context of cooperation.

[1] Dichotomy: Two contrasting events which are opposed while complementary.